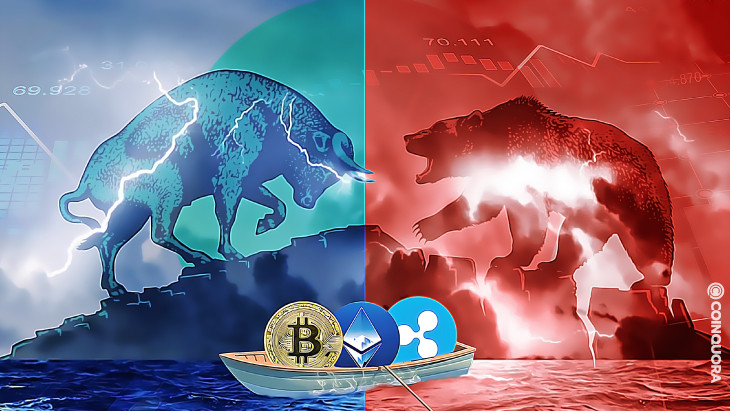 Bitcoin, Ethereum, and Ripple: Bulls and Bears Battle for Control

Ahead of the US Federal Reserve’s FOMC meeting, Bitcoin, Ethereum, and Ripple prices brace for impact. Bitcoin witnessed an increase in sell-side activity and a retracement in its price after a week of gains. Bitcoin’s price is at a make-or-break point — a decisive move in either direction could define the trend for the asset post the FOMC meeting.

Traders are currently on the fence; however, this is set to change with the news of an interest rate hike, as predicted by experts. Ahead of an anticipated hike, Bitcoin holders are cautious. The July 13 hike by the Federal Reserve triggered a 5% drop in Bitcoin price, and the asset recovered from the decline nearly instantly.

Bitcoin recouped its losses, and a similar reaction is expected from the asset after Wednesday’s meeting. The asset’s run up to $28,000 is threatened by the rate hike.

In the case of the second-largest altcoin XRP, the outlook is bullish. Brad Garlinghouse is optimistic that the payment giant will win the lawsuit. A win could fuel a bullish sentiment and push XRP higher in the long term. XRP could climb to $0.38 if the altcoin sustains above support at $0.34.

Ethereum price faces a hurdle at the $1,700 level, and a drop in momentum could extend the altcoin’s downtrend. Ethereum’s price drop below the $1.595 level could affirm a bearish trend reversal in the altcoin. However, a flip above the $1,595 level is a decisive move and could push the altcoin higher.

A daily candlestick close below $1,335 could indicate a breakdown of Ethereum’s uptrend. This move is likely to invalidate the bullish outlook, and Ethereum could revisit the monthly low at $877.70 — this is the maximum pain scenario.

Disclaimer: The views and opinions expressed in this article are solely the author’s and do not necessarily reflect the views of CQ. No information in this article should be interpreted as investment advice. CQ encourages all users to do their own research before investing in cryptocurrencies.