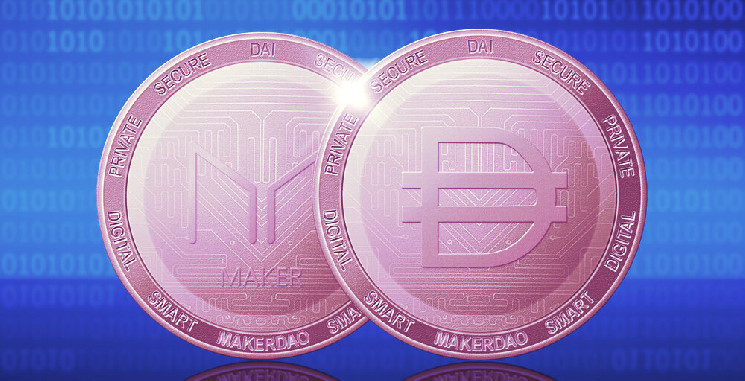 While crypto markets staged a rebound Friday morning, the MakerDAO governance token, MKR, was up 30% as investors bet on its DAI stablecoin amid Terra’s ongoing collapse.

The surge in interest was enough to make MKR the second-largest DeFi token, accounting for 7% of the $146 billion total value locked in decentralized protocols as of Friday, surpassing Curve, SushiSwap, and Lido in the process, according to DeFi Llama.

Over the past 24 hours, the market capitalization for DAI has also increased by roughly 2%, rising from $6.34 billion to $6.47. This increase, though slight, would indicate that users have recently turned to Maker to mint more DAI.

There’s been a lot of interest in MKR and its DAI stablecoin as Terra continues to crater.

Terra validators halted the blockchain for about two hours yesterday, resumed validating transactions, and then halted it again a few hours later.

Since then, the LUNA token has gone to $0.0000353, down 99.9% from yesterday. Meanwhile, the TerraUSD algorithmic stablecoin, UST, has fallen to $0.19, down 69% over the past 24 hours. As the token and stablecoin fell, Binance also made good on its plans to halt trading and delist them.

Maker is a DeFi lending and borrowing protocol. Users lock up their cryptocurrency—Bitcoin or Ethereum, for example—as collateral in a Maker Vault and mint DAI against it. Their assets stay locked in the vault until they’ve repaid their DAI.

DAI is an algorithmic stablecoin like UST. But unlike UST, it’s overcollateralized. That means when users lock up their crypto and borrow against it, they’re allowed to borrow DAI worth 55% to 75% of their collateral. This model is much safe, according to some experts.

“Partially collateralized stablecoins have repeatedly failed over and over,” Nik Kunkel, former head of backend services at Maker, told Decrypt earlier this week. “They cannot solve the fundamental problem of bank runs when the peg is under pressure.”

In a Twitter thread yesterday, MakerDAO explained how the vaults work and why bearish markets trigger forced liquidations of collateral to maintain those overcollateralized ratios.

“The Maker Protocol is healthy, liquid, and solvent with a 164% collateralization ratio and billions in liquidity reserves,” MakerDAO wrote in a tweet. “All DAI is overcollateralized, and its peg is as strong as this Decentralized Protocol.”

Polygon partners with Orbs and DeFi.org to launch an accelerator program

‘DeFi in Europe has no lobby,’ says co-founder of Unstoppable Finance